Leiden Classics: 5 questions on the origin of university democracy

The late 1960s: across Europe, students are demanding the right to more participation within their universities. In 1971 Leiden University was granted an elected University Council. It became quite powerful: the Council even had the right to dismiss the Chairman of the Board.

This week is the week of the University elections. An event that no longer surprises anybody, despite the fact that it is the result of a fierce battle fought by past generations. Leiden Political Science expert Geert van der Varst, Chairman of the Leiden University Council from 2005 to 2008, investigated for his thesis the students’ turnout at the University Council elections and the reasons they gave for voting.

1 Why was the University Council introduced?

Under the influence of the French student demonstrations, Dutch and Leiden students took to the streets in the late 1960s: they demanded more participation in the authoritarian university system. The De Jong Cabinet reversed the policy of the time and implemented a democratic system of governance. The new University Council which was introduced in Leiden in 1971 had a lot of power at first. All the proposals of the Executive Board had to first be approved by the Council and the Council could even dismiss the Chairman of the Board.

2 What effect did this have on the university?

The University Boards began to take the wishes of students and staff members into account. But this involved quite a struggle. Van der Varst: ‘The Council often engaged in intense discussions which had at times little to do with the University itself. For example, the Council wanted the Board to express its concern to the ambassadors of dictatorial regimes.’ Many staff members were not pleased about the high degree of participation of students, because this supposedly led to internal division and reduced effectiveness. In 1997, the Kok I Cabinet reduced the power of the Council to ensure a more effective administration of universities. 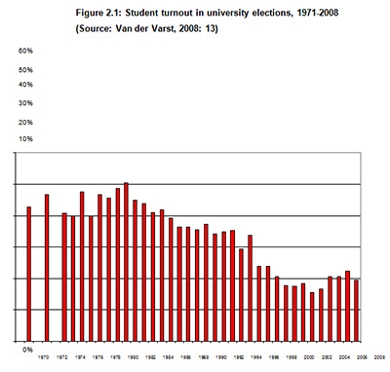 3 What is left today of the power of the University Council?

The Council does not have so much actual power anymore, but it does have influence,’ says Van der Varst. ‘The Executive Board still has to first submit all its proposals to the Council, if only for advice. This knowledge keeps the Board on its toes, and forces it to acknowledge the fact that its plans will be tested and made public. In Leiden we have a real polder model. The Council is often involved in plans from the earliest stages.’

4 What is the student turnout at the elections?

In 1971, the first year, 43 per cent of students voted and the turnout then increased a little every year until it reached a peak of more than 50 per cent in 1982. After that the turnout dropped dramatically. By 1996, it had dropped to 34 per cent and in the following year, when the powers of the Council were reduced, it dropped even further, to 24 per cent. In the last few years the turnout has been hovering around 20 per cent.

5 What reasons do students give for voting or not voting?

Non-voters predominantly speak of their lack of knowledge regarding the election themes and the function of the Council. ‘This is not cynicism,’ says Van der Varst. In 2008, he asked students to respond to the proposition ‘The University Council doesn’t have any power anyway,’ and fewer than 4% agreed. Those who do vote do so out of a sense of duty and because they know someone who stands for election. ‘Voters are usually active students, students who are members of an association. A flourishing student community is the most important prerequisite for a high turnout.’