Museum Boerhaave commemorated the hundredth anniversary of Einstein’s Theory of General Relativity with the exhibition ‘Einstein & Friends’. The exhibition shined light on the famous physicist’s Dutch friends and his love for Leiden. A review featuring seven images can be found below.

Einstein and Lorentz at the Ehrenfest home 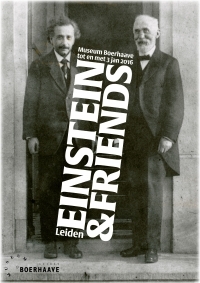 in 1911 together with his wife, at the invitation of a number of students. The couple stayed in the home of Hendrik Antoon Lorentz, who owned a house on the Hooigracht. This picture of Einstein and Lorentz was taken in 1920 by Paul Ehrenfest, in front of his house in the Witte Rozenstraat. Ehrenfest and Einstein were close friends. Einstein was particularly fond of Leiden, calling the city ‘that delightful piece of land on this barren planet’. 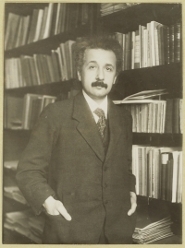 with fellow physicists, with whom he discussed his theories. They also frequently played music together. In 1916, in the midst of the First World War, he was also very happy to escape turbulent Berlin for a while. He also stayed with Ehrenfest that time, and discussed the consequences of the General Theory of Relativity for the universe as a whole with Leiden’s mathematician and astronomer Willem de Sitter. Einstein was caught on camera in Ehrenfest’s study on the Witte Rozenstraat.

The first of three Zeeman windows

In 1896 physicist Pieter Zeeman discovered the so-called Zeeman effect in the laboratory of Kamerlingh Onnes. This refers to the influence of a static magnetic field on light. It wasn’t long before Lorentz developed a theoretical explanation for the effect, and together they won a Nobel Prize in 1902. Twenty-five years after the discovery, Harm Kamerlingh Onnes – nephew of the cold professor – made a series of stained glass windows depicting the discovery and the explanation. In the top window, Zeeman is looking through a spectroscope at ‘split’ light, which is being beamed through glowing salt. The Zeeman windows can currently be admired in the Oort Building, though they previously graced the downstairs corridor of the Kamerlingh Onnes Laboratory for decades.

Einstein began visiting Leiden regularly after 1911 to give lecturers as professor of an endowed chair. However, he already wrote an application letter to Heike Kamerlingh Onnes, Professor of Physics and director of the Physical Laboratory, in 1901. Could he use another assistant? The young Einstein, who has just graduated, was turned down. However the tables had turned by 1920, when Kamerlingh Onnes was very keen to get the already world-famous Einstein an appointment in Leiden. 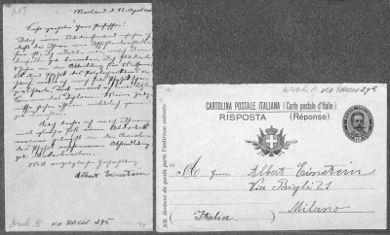 ‘Upon concluding your lecture, while thanking people, 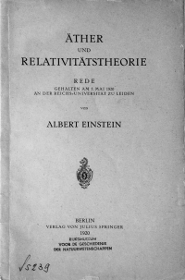 calmly drink a glass of water.’ This advice was given to Einstein by Ehrenfest before he gave his inaugural lecture in the Grand Auditorium on 27 October 1920. This gave the older gentlemen in the hall enough time to wake up when Einstein finished his lecture.

Einstein, first on the left of the photo, during the ‘Magnetwoche’ 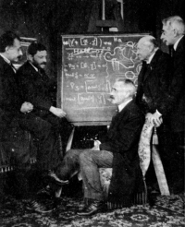 or Magnet week. This three-day conference on magnetism was organised in 1921 to honour Einstein’s inaugural lecture as endowed professor. Part of the congress was held in the living room of ‘Huize ter Wetering’ on the Galgewater, where this photo was taken. It was the home of Kamerlingh Onnes.

In this photo, Einstein can just be seen at the back of the cortège. This photo was taken in 1925, when Queen Wilhelmina was awarded an honorary doctorate in the Pieterskerk. Einstein was a remarkable figure that day. He was wearing a ‘costume of sky blue Atlas silk and matching hat with large ostrich feathers that quifvered at every step’. The outfit originated at the academy in Madrid, where Einstein had been granted an honorary doctorate and a matching outfit. To this day, professors still dress in ‘outlandish style’ when honorary doctorates are awarded at Leiden’s dies natalis. 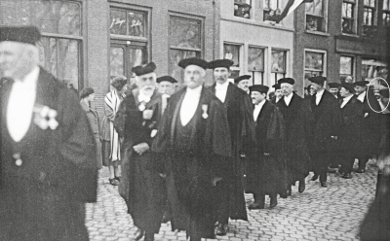