How do archaeologists test ideas about the evolution of the modern brain? Veni-researcher Geeske Langejans and then Master student Paul Kozowyk (Leiden University) prepared different Prehistoric glue recipes and tested these for strength in modern test machines at the Delft University of Technology. 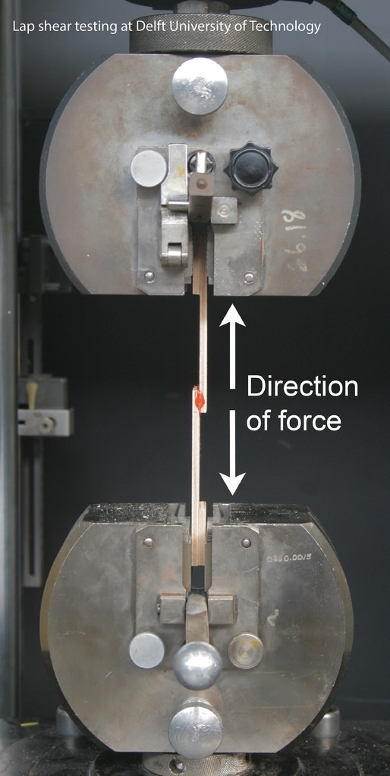 Producing a good glue was a precise job: you needed a good understanding of the ingredients and also of abstract concepts, such as miscibility, stiffness, viscosity and tack. Because people made these glues 70,000 years ago they must have had a sophisticated brain.

To make tools Stone Age people used glues made from tree resin and other natural products. Researchers from Leiden and Delft universities recreated prehistoric glues and found that resin indeed becomes much stronger when a mix of ingredients are used, but only in the right proportions.

The team tested the strength of pine resin glues for which they slowly increased the amount of beeswax and ochre additives. At the Delft Aerospace Engineering Faculty these replicated ancient glues were tested by pulling them apart (lap shear test) and by hitting them with a pendulum (impact test). The strongest recipe consisted of seven parts pine resin, three parts beeswax and two parts ochre. Small changes in the ingredient ratios had a negative effect on the strength of this recipe, and pure pine resin is so brittle and weak that the samples broke before the test machine was even switched on. Of course natural tree resins vary a lot depending on the environment, location, or tree type, and they will react differently to additives. In other words, this golden recipe of 7:3:2 needs constant and intelligent tweaking.

This research on prehistoric glue recipes was published in PLOS ONE  conducted by Veni-researcher dr Geeske Langejans and the now PhD candidate Paul Kozowyk (Leiden University) in collaboration with dr. Hans Poulis (Aerospace Engineering Faculty, Delft University of Technology)  as part of Geeske Langejans’s Veni project: What’s in a plant? funded by NWO