‘‘Stop focusing on the money and start creating a heart for Europe’’ This Friday, the 29th of April, Bernard Steunenberg and his co-authors will launch their book ‘Fit for the Future’. We spoke with him about issues presented in the book, the EU Presidency and why people should read the book.

1. The Dutch EU Presidency: Why should we care?

We are more than halfway through our time of chairing the EU. What could we as Dutch residents have noticed from the chairmanship apart from some colorful flags?

Steunenberg: To be honest… very little. That is very typical of the Dutch ‘pragmatism’ we also describe in the book, which means keeping the Presidency very low-key, whilst keeping the focus on solving the problems that are presented to us. Especially after the ‘no’ on the referendum regarding the association agreement with the Ukraine, the Dutch involvement in the EU is a heated topic, so most politicians, and especially the ones in the current governing coalition, do not discuss it very much. After all, publicly showing that you are in favor of European solutions may result in a drop in popularity at the next elections. It is thus not very surprising that the Presidency has been kept relatively quiet.

In your book you are talking about Minister Koenders who announced that we would do the Dutch EU Presidency in ‘our’ way. How do you think that the Netherlands chairmanship has influenced the Refugee Crisis, for example? Have we lived up to this challenge of doing it so different that we can call it ‘our’ way?

Steunenberg: That’s a very interesting but difficult question! Again, I would like to point at the same approach that was mentioned before: facilitating but low-key. Interestingly, this approach worked in the sense that there is now an agreement with Turkey on sheltering the refugees, on which our own parliament was initially much more cautious. Especially the broader deal in which the accession negotiations with Turkey are re-opened, at least for some chapters, was not quite the result the opposition parties in parliament were hoping for. You can see the facilitating nature of our country as an EU chair in this. Several political parties in parliament would think twice about how an agreement that would bring closer the option of future Turkish EU membership.  That the government went along illustrates the facilitating role as Presidency of the Council.

2. EU Skepticism and EU integration: where does it come from and how do we deal with it?

The referendum about our association with the Ukraine has shown once more that EU-skepticism is a growing problem. Where does this skepticism come from?

Steunenberg: This is one of the major issues we studied in the past and is discussed in the book. There are multiple rational reasons why people are skeptical of the EU. Parts of the electorate is skeptical whether citizens may have  impact on the policies of the European Union; others oppose integration because of its perceived negative economic impact including the loss of jobs and the increased wage competition. These are real concerns citizens have.  Unfortunately, politicians currently do too little to address these concerns and hence they are seen as consequences of European integration. Too much room is left here for EU-opposing groups. Politicians should start taking these concerns seriously and start to address these problems also in an EU-context. Stop talking about how much money we receive because of the EU: start creating a heart for Europe and the EU. Give people the feeling they have a say on matters that are important to them. In this way, people are given a sense of being a part of a European Union that shares basic values.

Do you think the referendum will be followed by more referenda, for example on TTIP?

Steunenberg: In general, a referendum is not a very nuanced tool to determine what people want. Between the ‘yes’-‘no’ vote on some proposition, there may exist various other opinions that are not well reflected in the final result. The Ukraine referendum has given Dutch politics a huge hangover.  It forces us to think about how to deal with EU-skepticism, how to give people a voice in European matters and even more so, how to go about referenda. Current discussions make clear that the government, but also the opposition, for various reasons, find it difficult to translate the outcome of this specific referendum into policy. Furthermore, there are many important but difficult issues that need to be addressed when discussing referenda, including on what issues referenda can be called. Would it be possible to call a referendum on, for instance, a 25% tax reduction to every Dutch citizen? If some interest group would manage to call a referendum on TTIP, Dutch politicians will be forced to re-consider the means of going about it.

How do we deal with EU skepticism and how do we create a European identity in a nationalistic framework?

Steunenberg: I think it is key that Dutch politicians start to be more vocal about the EU, proposed policy measures and how these measures are going to affect us all. Will legislation stimulate growth employment on fair terms? How do we deal with competition and trade, including trade with the US? It is important that politicians inform citizens about these issues; to discuss these with them, directly or through the media; and engage with people about the proposed but also alternative solutions. Taking people seriously is an important first step, which may also mean that European integration needs to be scaled down in some areas.

Last question: why should we read the book?

Steunenberg: This book is a beautiful illustration of Europe and all its imperfections. If you are an EU-skeptic and do not believe in the EU at all, you may better understand what Europe does and what it cannot do. If you care about key issues in the EU and want to understand these, reading will help to better assess the possibilities and limitations of European policy. It’s not a blueprint for success and failure. Rather, it requires the readers to critically think about alternative solutions for important issues and calls upon their creativity. I think that makes it a really interesting book.

The book was launched on April 29th, 2016 at press centre Nieuwspoort in The Hague. Click here for more information about the book. 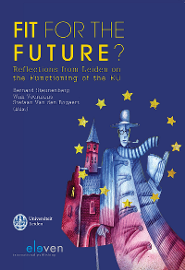